“Spaceweather alert – first “red alert” in 6 years” A solar wind substorm is approaching, according to the  Solar Radiation and Climate Experiment (SORCE) satellite. Standby for Global Warming! Actually, this post is fundamentally irrelevant to the Global Warming debate.

Anthony Watts shows this chart of Total Solar Insolation, which I’ve recreated for clarity, that his readers may decide implies that the Sun’s energy output is variable and hence the natural and temporary source of any Global Warming: 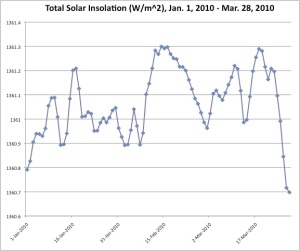 But isn’t this chart a more honest depiction of the data? 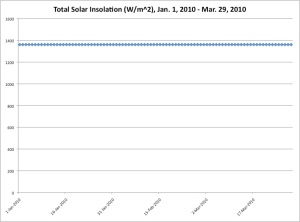 The SORCE experiment is sound and the data is good, but it’s hilarious that this deceptive chart is the very next thing that Anthony posts after Frank Lansner’s allegations about IPCC Report chart “tricks”.