Prominent Climategate Figure Threatens Lawsuit over Spoof Video – No Cap-and-Trade Coalition Says “Bring it on” This is a funny one, especially because Anthony Watts’ buddy “Charles the Moderator” has done the posting (read to the end). I’m left wondering – is Dr. Mann thin-skinned or are these guys just stupid?

First act: “Minnesotans for Global Warming” (M4GW) create a video that they posted on YouTube called Hide the Decline that defames Dr. Michael Mann with baseless accusations that he falsified climate data. The video also infringes on copyright and exploits Dr. Mann’s image without permission. Pretty much a legal slam-dunk for Dr. Mann. Usually these slimy things are brushed off, but this time Dr. Mann had his lawyers act on the matter as Rush Limbaugh had begun promoting it. M4GW knew they’d been caught out and immediately caved in, but of course the defamatory video had already spread far and wide and had lodged itself in the thoughts of the feeble-minded. 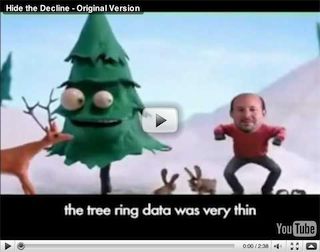 Hilarity! In a defamatory kind of way.

Second act: “Little guy” M4GW turns out to be a limb of the astroturf operation No Cap and Trade, “an alliance of organizations concerned about the devastating impact that a cap-and-trade scheme could have on American families, businesses and the faltering US economy.” They’ve staged a media event, complete with dancing mascots, to announce that they’ve posted the original defamatory video as well as a revised version that presumably substitutes a malicious caricature for the images of Dr. Mann. Why “presumably”? Go to the third act…

Third Act: YouTube pulls the No Cap and Trade version because of different copyright violation charge by JibJab Media. 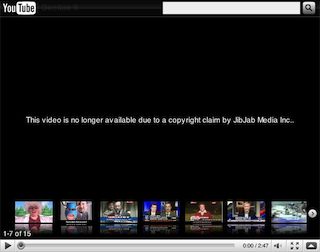 Denouement: Why didn’t Anthony post this himself? Well he’s been on the wrong end of a copyright violation accusation before, hasn’t he? See this Climate Crock of the Week video and related coverage at Climate Progress.