“Lower Than This They Cannot Stoop“. Thomas Fuller tells us that an edgy British video called No Pressure that uses shock-value images in campaign to persuade people to lower their own emissions by 10 percent has destroyed any chance of discussion about global warming.

I will say that it’s a pretty strange one-off video. I understand that it was never aired and has been yanked from the 1010global.org/uk website. Is blowing up people (“even children!” note the scandalized denialists) who can’t be bothered to participate in conservation efforts a helpful image? Not really. I suppose someone decided the shock-value would draw publicity and that maybe the more prosaic intended message would get an exposure.

Thomas tries to insinuate that the exploding people represent the noble, independent “skeptics” being punished for their resistance, but the victims are clearly some kind of unsuccessful representation of ‘laziness’ or ‘thoughtlessness’. [Update: maybe ‘complacency’ is the best description.]

Thrash away, Thomas. Every day must have its own scandal. You’ll be considering something else “the lowest ever” before the week’s out. Last week it was the tide of public opinion is turning towards us! This week its we’re a threatened minority!

The comments at WUWT are naturally full of Nazi references, argumentative denialists ache to make them. Ironically, in the midst of the expressions of outrage over the paranoid conclusion that the “alarmists” want to identify and eliminate their opponents, Anthony Watts demonstrates that he actually engages in researching and intimidating his opponents with this little item about a commenter (David Gould) who dares to suggest that the video was an over-blown dramatic device: 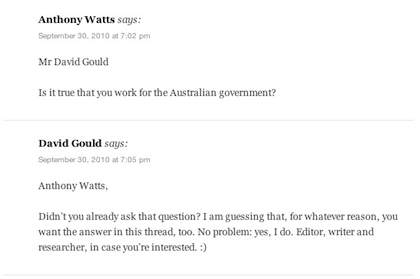 11 thoughts on “Lower Than This They Cannot Stoop”

Leave a Reply to Watching the Deniers Cancel reply