“Australia’s white summer, Monbiot’s red fury“. Watt a surprise, Anthony Watts drawing our attention to a freak weather event in Australia. This must surely prove that there’s no Global Warming! Anthony also stretches his mental capacity to compare the size of Australia to America and to Europe. Anthony is mad that environmental reporter George Monbiot consulted “the kids at the Climate Rapid Response Team“, aka professional climate scientists, to understand this Australian weather. How dare he! 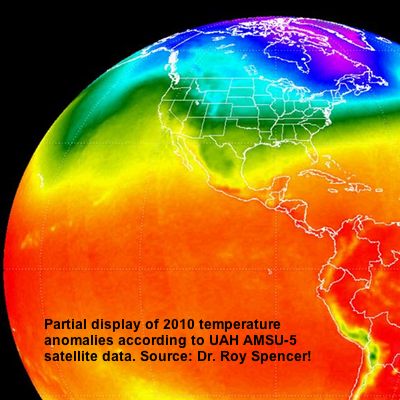 Hmmm... Dr. Spencer's map is pretty red. He must be in on the plot now too.

Anthony has to come up with something to distract from the fact that 2010 has proven the hottest year in the instrument record even with only a moderate El Niño influence. (Note: who cares about one year? That’s a denialist distraction. It’s the long-term trend that matters.)

Further more, we learn that the weather stations in remote Greenland communities are clearly affected by the urban heat island effect. Anthony’s speculation proves it! (Maybe this particular rant was a bit of nostalgia for the old days when Anthony regularly tried to get away with this UHI b.s.)