“Stanford claims farmers “dodged impacts of global warming” in the USA, but you have to find it first.“ (May 6, 2011). When Anthony Watts does his own posting you can be sure that it will be short and dishonest. Here Anthony disputes a Stanford University report on the impact of global warming on US crop production, which states:

Global warming is likely already taking a toll on world wheat and corn production, according to a new study led by Stanford University researchers. But the United States, Canada and northern Mexico have largely escaped the trend.

Anthony rebuttal is to slap together charts of US corn yield and US temperature to “prove” that noisy regional weather data shows no global warming. He also alludes to the comical “CO2 is essential for life” argument.

So Anthony’s entire argument is to compare two years of the US annual mean temperature, 1980 and 1981, against the two most recent years and declare that since they are “about the same” this proves that there’s no global warming? Dude, you’re a frickin’ cherry-pickin’ idiot.

Anthony’s lame “we’ve seen exactly this before” deception is only faintly plausible if he deliberately removes the default trend line from his chart. We can fix that though (replicate it here, but ignore Anthony’s advice to exclude the trend line): 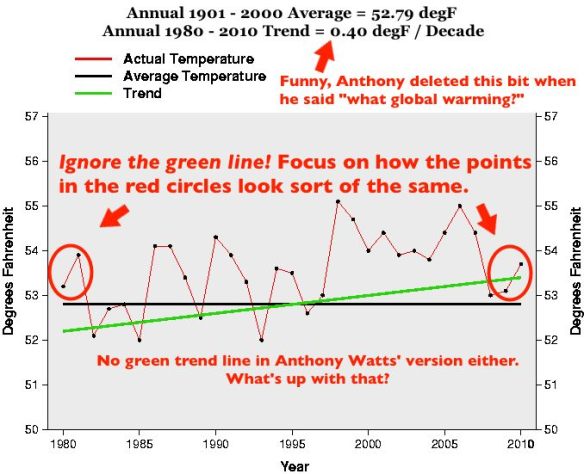 Anthony Watts took care to remove the trend from his version of this chart.

As usual Anthony’s also using several levels of cherry-picking to gin-up his “What global warming?” climate claim aside from the two-year comparison windows. The US Corn Belt is not the same geographic area as the continental US, so he’s not demonstrating anything at all about the Corn Belt climate. Likewise, the continental US represents only a fraction of the global record.

The Stanford article also mentions an US trend towards anomalously cooler summers, which coupled with the unequivocal rise in annual average temperature implies warmer winters. US agriculture has been partly insulated from global warming by keeping the growing season temperatures within the crop’s tolerance zone. Why didn’t Anthony address that? Hmmm.

1 thought on “Stanford claims farmers “dodged impacts of global warming” in the USA, but you have to find it first.”