“Sense and Sensitivity“. Citizen-scientist Willis Eschenbach becomes an expert on insolation and tells us that because the geographic poles receive 24-hour sunlight in the summer they can somehow get hot. Then he uses his sudden scientific insight to make up some predictions and declare his ideas proven. 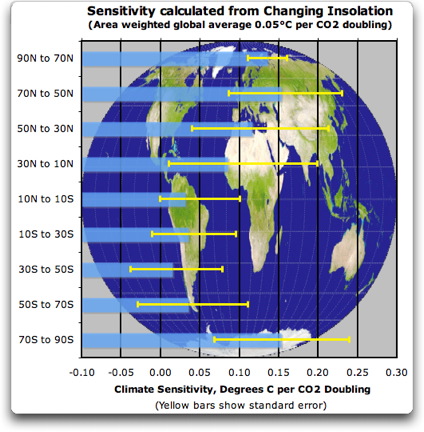 So, how are these values calculated? And those error bars look pretty massive.

Earth to Willis: Regardless of your naive speculations the IPCC’s 3°C climate sensitivity from a doubling of CO2 is based on empirical measurements that suggest a range of 2.0 – 4.5°C. It is highly improbable that the sensitivity is less than 1.5°C. You’ve been engaged in an enthusiastic exercise in self-delusion.