“Portents in Paris“ (2015-01-10). Last week Islamic fanatics cold-bloodedly murdered a dozen French journalists at Charlie Hebdo who have mocked extremist Islam, and there’ll be an environmental conference in Paris this year. Therefore environmental activists are just as bad as murderous Islamic fanatics! An idiot’s cartoon proves it!

“Freedom of speech” is really just a useful jumble of letters to Anthony, something to whine accusingly while pretending that he doesn’t aggressively impede, censor or block critics on his own little mud-pit of a website. 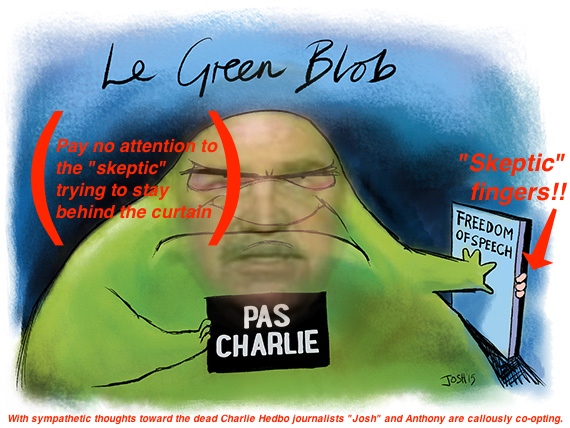 From the crude pen of a crude thinker.

Here’s a tip: “freedom of speech” doesn’t mean that anyone is required to repeat Anthony or his buddies’ statements. And when the things Anthony declares must be heard don’t rise above the level of malicious, dishonest, false and misleading he’s going to have a hard time finding someone who is willing to share them with others. Unless they have the same malicious agenda.

2 thoughts on “Portents in Paris”