The Kamil crater in the Egyptian desert was first spotted in 2008 by mineralogist Vincenzo De Michele in Google Earth imagery. From a European Space Agency press release:

One day within the last several thousand years, a rare metallic meteorite travelling over 12 000 km/hour smashed into Earth’s surface near what is today the trackless border region between Egypt, Sudan and Libya. The impact of the 1.3 m, 10-tonne chunk of iron generated a fireball and plume that would have been visible over 1000 km away, and drilled a hole 16 m deep and 45 m wide into the rocky terrain. 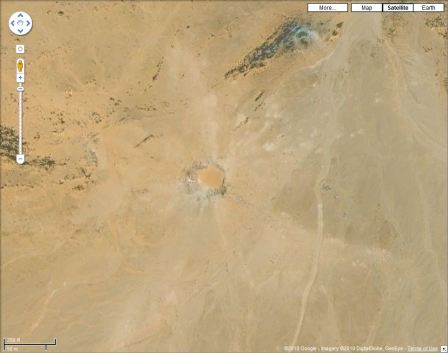