“Justice has been done”. Osama bin Laden, founder of the terrorist organization Al=Qaeda, was killed by US special forces during a raid on a fortified house in Pakistan on Sunday May 1st. This is clearly a good thing… Bin Laden had been in hiding for ten years, since masterminding the September 11, 2001 destruction of the World Trade Center towers in New York City.

Anthony Watts’ urge to be a part of history, and lust for web hits, compels him to cast about for satellite photos of the site for his readers’ vicarious pleasure. Funny how President Obama seems strangely absent from Anthony’s version.

“Quick, somebody slap a carbon tax on this new planet“. Oh, I see what you did there, Anthony. You used a completely un-related NASA astronomy news report to make fun of carbon taxes! That is so clever! It’s like you’ve jumped all the way to Class Clown with a rank of Grade Six!

Is your headline the only thought you had? Apparently yes.

“Wasted food a huge energy gobbler“. Hard to argue with this press release that Anthony found: Wasted Food, Wasted Energy: The Embedded Energy in Food Waste in the United States. 2% of America’s energy consumption is due to food waste.

“Watching lightning jets hit the ionosphere“. Like all of Anthony Watts’ “informative” posts, all he did here was copy and paste a SpaceWeather.com item about lightning jets.

Perhaps Anthony sees these massive and only recently recognized upward electrical discharges as evidence that nature is powerful enough to explain all the warming, which isn’t happening, that we have seen? If so, then guess what we nearly agree! Natural climate processes are very powerful. Too bad they can’t actually be shown to cause the modern global warming we have recorded.

“Newly discovered planet may have water on its surface“. Anthony Watts pastes in a University of Hawaiʻi at Mānoa press release about a newly discovered planet that appears to be in the “Goldilocks Zone” where liquid water can exist. If you want to learn more that Anthony’s “Look! A pony!” post, try Bad Astronomy. 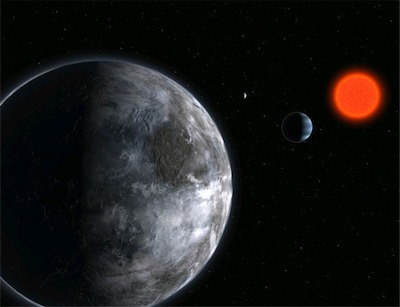 Although its merely 20 light years away it’s calculated to be at least three times the Earth’s mass. So not a good fall-back position if we take Anthony’s word that global warming isn’t bad (and also isn’t happening).

“Mexican mudslide update: thousand dead becomes zero“. Mexicans are alarmists too! At first they estimated a thousand dead from a mudslide, now it’s none. Or maybe 11. Never trust gubmint, scientists, or the “mainstream” press, right Anthony?

This mudslide in China back in July is way cooler. AP Photo at The Big Picture.

“Igor cool ocean“. Anthony Watts notes that hurricanes “do a splendid job of cooling the ocean surface over which they travel.” He even trusts some nasty NASA computer climate models to explain it. Thus ending Global Warming!

How does he does manage to ignore the more relevant discussion of whether increasing numbers and intensity of cyclones are a symptom of Global Warming? Here are a few random notes on the subject:

The Kamil crater in the Egyptian desert was first spotted in 2008 by mineralogist Vincenzo De Michele in Google Earth imagery. From a European Space Agency press release:

One day within the last several thousand years, a rare metallic meteorite travelling over 12 000 km/hour smashed into Earth’s surface near what is today the trackless border region between Egypt, Sudan and Libya. The impact of the 1.3 m, 10-tonne chunk of iron generated a fireball and plume that would have been visible over 1000 km away, and drilled a hole 16 m deep and 45 m wide into the rocky terrain.

“NASA discovery: solar storms don’t always travel in straight lines“. Anthony Watts posts another NASA news report, Solar Storms can Change Directions, Surprising Forecasters. A 2008 coronal mass ejection (CME) was observed by NASA’s STEREO-A and STEREO–B spacecraft. The researchers speculate that CME’s follow the sun’s curving magnetic field until they get swept up by the solar wind. The paper by Byrne et al, Propagation of an Earth-directed coronal mass ejection in three dimensions, is in the Sept. 21, 2010 issue of Nature Communications.

I guess Anthony thinks this report is helpful in suggesting that a) we don’t know anything about that big fiery ball in the sky, and b) them scientists are going to change their minds anyway, so don’t bother listening to them.

“Where the particulates are (and aren’t)“. NASA posts a press release (New Map Offers a Global View of Health-Sapping Air Pollution) about an estimate of the global distribution of fine particulate matter, and talks about efforts to assess the health risks these particles pose. Anthony Watts decides it’s all just dust (natural!). 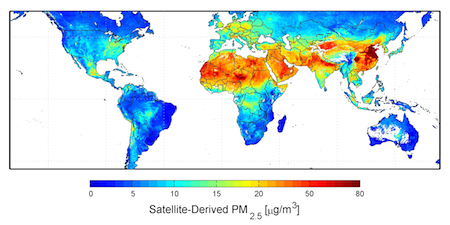 Why the random grousing about random NASA research, Anthony? Just some kind of reflexive urge? The commenters join in with a chorus of “scare tactics!”