“Analysing the complete hadCRUT yields some surprising results” (2011-08-04). Anthony Watts learns from a post by right-wing “Global Warming Policy Foundation” lobbyists about a post by Luboš Motl that proves that 30% of the Earth has cooled. Run from the Ice Age! Or something like that.

After five years of denialist pretense that the data was being hidden from them (because they had to go to the trouble of requesting it from the various national meteorological organizations that owned it) the unified release of the global data set used by the Climate Research Unit at the University of East Anglia has forced them to switch to a new fake numbers game. Expect a lot more of this kind of transparent misdirection, designed to keep the uninformed public distracted. Expect Anthony to make a big fuss about it each time. 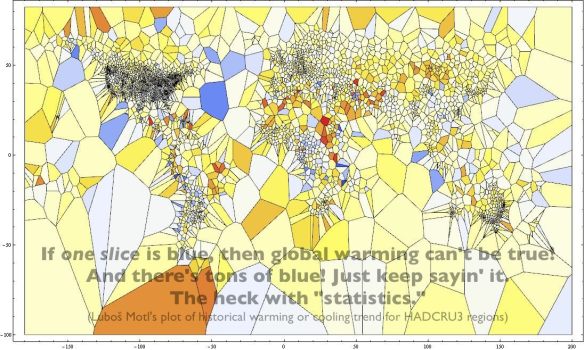 Look at how much of that cRaZy blue there is!

So if we are to believe Motl, the Earth is actually 30% cooler than it was 77 years ago. Run from the Ice Age! No wait; some places have cooled even though most other places have warmed, so it’s not global warming. No wait, it’s that the HadCRUT3 temperature data comes from weather stations that only represent particular small areas, so it can’t tell us anything about global temperature. (Dang! They should have just used that one temperature station that records the whole planet.)

Err, maybe this is why scientists use statistics? To collect and objectively interpret large data sets with complex trends and arrive at an objective understanding.

Hold on. Is Motl really trying to make the point that unless every station shows a warming trend then we can’t claim that there is global warming? Is his point really so dogmatically stupid? Maybe, because in spite of his self-declared brilliance Motl has to admit that he got “standard deviation” mixed up with “root mean square“. Unfortunately he says “I don’t have the energy to redo all these calculations – it’s very time-consuming and CPU-time-consuming” but I’m sure it’s a wash, huh?

Anthony Watts and the “Global Warming Policy Foundation” are certainly happy to overlook this, because to them the fact that 30% of the recording stations show a cooling history apparently makes their heads reel. Not climate scientists however. Only an idiot would expect a trend to be uniformly expressed throughout a complex natural system.

21 thoughts on “Analysing the complete hadCRUT yields some surprising results”