At the same time, I have been repeatedly insulted about it on the web. It is claimed that it has been debunked, is junk, that E&E is not a “real” journal, that I’m a hack, that I “only” used 18 series (though 2 were composites covering China & North America), etc. In the ClimateGate emails, Mann called it “awful” (which I’ll take as a compliment!). Lot’s of fun. In this post I demonstrate perhaps a little vindication.

Feel good to get that off your chest Craig?

Craig Loehle's misleading comparison of his discredited temperature reconstruction to a new one by Ljungqvist.

So was this victory achieved? Apparently through a new paper by Fredrik Ljungqvist called “A new reconstruction of temperature variability in the extra-tropical northern hemisphere during the last two millenia“, in Geografiska Annaler. And all Loehle has to do is cheat the charts a bit! Don’t align over the calibration period, center “on their respective long-term mean values”, ‘warm’ the new reconstruction a bit to get it closer to yours, use non-comparable baselines, and… victory! 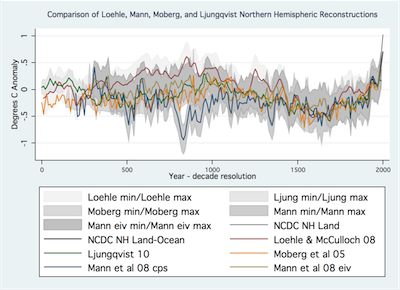 An honest comparison of Loehle's proxy reconstruction. Loehle's is the red high one, Ljungqvist's is the green one in middle with the rest. By Zeke Hausfather

Funny that the Ljungqvist abstract ends with this, uh, inconvenient quote (underline mine):

Our temperature reconstruction agrees well with the reconstructions by Moberg et al. (2005) and Mann et al. (2008) with regard to the amplitude of the variability as well as the timing of warm and cold periods, except for the period c. ad 300–800, despite significant differences in both data coverage and methodology.

I guess Loehle and Anthony were too lazy to read the whole thing, even though they pasted it into their article. Is this what passes for “vindication” in denialist circles these days?