“Whither went the warmer weather?“ (2013-12-16). “17 years, 3 months with no global warming” says Anthony Watts, our all-knowing guide to the Universe. He knows this because Britain’s celebrated Morris Dancer of the intellect, Lord Christopher Monckton of Brenchley says so in his usual tangential, conspiracist, long-winded, self-delighted way. He even has a tongue-twister post title and a poem to back him up, who can beat that?

Furthermore, the Lord declares that “the models are in fundamental error”, trying to imply that conventional climate science is somehow wrong. As usual he’s too busy pontificating to consider, in this case, the distinction between prediction and projection.

Never mind that this November just past was the hottest ever in the GISS record, or that the HadCRUT3 warming trend is pretty glaring if your eyes are open. Look at Monckton’s data!

Wait that’s the GISS data, posted by Tamino, which kinda undermines the Lord. We only trust the RSS data! Look again:

Damn, that’s not flat! Can’t a right-thinking denialist count on Dr. Roy Spencer? Oh, his chart wasn’t playing the long game, it was just designed to boast about his UAH satellite data corrections (it’s only “fudging” when other scientists do it).

Best to stick to Lord Monckton’s own chart, with the messy contradictions and distracting numbers tucked away out of sight. Squish the scale down too and draw a nice thick flat line on it: 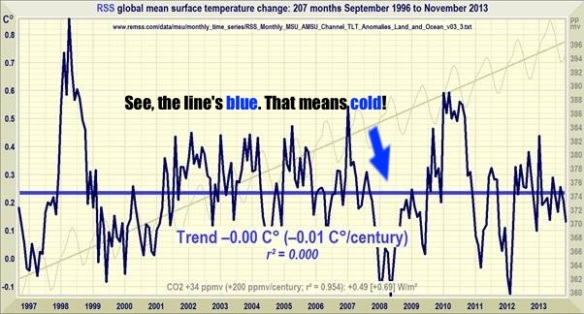 3 thoughts on “Whither went the warmer weather?”