“Cold kills: Summer no sweat for Aussies but winter freeze fatal“ (2015-01-13). In which Anthony Watts tries to move the pea from under the “it’s not getting hotter” shell to the “who cares how hot it gets anyway” shell.

After the crazy temperature records all across Australia earlier this month, Anthony somehow had to change the subject to something a little less awkward I guess.

Not quite sure why Anthony thinks, or pretends to think, it’s a revelation that there are more deaths during cold weather than hot weather. Or what that really has to do with climate. Cold weather deaths are generally a risk to those with inadequate shelter, not some magic indicator of ‘the best’ climate for Homo sapiens.

It makes a useful denialist talking point I guess, but I love how eagerly Anthony jumps on any mention of the word “cold”. It’s almost Pavlovian!

“Watching the Deniers” makes hilarious goof while accusing WUWT of “doctoring” NSIDC images (2013-07-05). If Anthony ever happens to be right about something, which like a stopped clock is about once every 43,200 instances, you can be sure he’ll beat it to death (or is it more strut about like a rooster?). When Anthony’s Aussie ditto head Eric Worrall spotted an accusation at Watching the Deniers (WtD) that Anthony had doctored an Arctic Sea Ice Extent graph to conceal the fact that the decline in Arctic ice extent was more than 2 standard deviations away from Anthony went .

Silly Mike, Anthony only by pure chance used the option on the NSIDC charting web page that suppressed the display of statistical significance! That’s just misrepresentation, not dishonesty, the kind of thin line that Anthony spends his life dancing back and forth over.

Anthony Watts likes to use the version of this chart that excludes statistical context. Makes it easier to imply that every wiggle is “just natural”. Click to see the difference.

After a short display of indignation Anthony runs quickly through the gamut of blogging postures.

Thus ending Global Warming. Which was natural anyway if it was happening. Which it wasn’t.

“Oh noes! Sea level rising three times faster than expected (again)“. (May 2, 2011) Anthony Watts tells us that a Danish newspaper article about sea-level rise is another crazy warmist exaggeration. How can expected sea-level rise suddenly be three times higher than earlier predictions? Also, the article photo has a funny-looking foreigner wearing a beret in it. Chuckle with superiority and don’t think about it too much I guess.

Sea levels were estimated to rise between 0.9 and 1.6 metres by the year 2100 according to the findings by the Arctic Monitoring and Assessment Programme (AMAP), cited by Danish daily Politiken, DPA reported.

These are not new numbers. When a newspaper covers this topic these estimates will be present as even Anthony’s 2009 Google search screen capture shows. The IPCC 2007 Fourth Assessment Report (AR4) estimate of 0.3m to 0.9m has long been considered too cautious. Perhaps Anthony thinks that newspapers should only write about something once? He’s free to repeat his misinformation ad nauseam though I guess, because he digs straight in and sticks to a favorite theme.

Anthony’s rebuttal is to talk about the rate of current sea-level rise (what, it’s rising? Oops) while pretending to disprove predicted sea-level rise by 2100. Just one of the many dull-witted misdirections he’s been performing for years. Unfortunately it only works for heads already bouncing up and down in agreement.

Anthony turns to his sea-level citizen-scientist, Willis Eschenbach, for what passes for confirmation (yes, my eyes roll too when I see that name). OMG it’s true, sea-level rise probably isn’t accelerating at the moment! In fact if you cross your eyes and decide that two years is a meaningful period of time, you can even pretend it’s sort of slowing down. Global warming, which wasn’t happening, is over! Stock up on blankets and woolly socks! 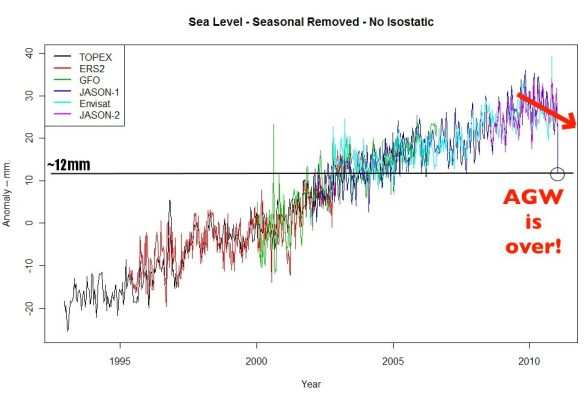 A plot of sea-level rise anomaly, not sea-level.

Of course sea-level is still, you know, rising.

Help asked for Dr. Tim Ball in legal battle with Dr. Mann. I’ve started dipping back into the putrid dung heap that is the archives of Anthony Watts’ blog and came across this recent plea by Sky Dragon Co-Slayer John O’Sullivan. Anthony Watts naturally professes to “have no dog in this fight.” Neither do all the other denialist blogs singing along in beautiful harmony.

After all, isn’t poor victimized Dr. Ball “widely recognized as one of Canada’s first qualified climate scientists”? [Not a chance. He’s a geography professor who left the University of Manitoba in 1996. Here’s his rap sheet.] Maybe he’s just a caught-out liar who readily turns to puffed up legal threats against his critics.

Judge for yourself of course but this is how the nut-jobs at the graphic arts crime scene called the Canada Free Press blog (who are curiously fixated on how much longer Barack Hussein Obama will be the President of the United States) recently defended him on a similar matter:

On January 10, 2011, Canada Free Press began publishing on this website an article by Dr. Tim Ball entitled “Corruption of Climate Change Has Created 30 Lost Years” which contained untrue and disparaging statements about Dr. Andrew Weaver, who is a professor in the School of Earth and Ocean Sciences at the University of Victoria, British Columbia.

Contrary to what was stated in Dr. Ball’s article, Dr. Weaver: (1) never announced he will not participate in the next IPCC; (2) never said that the IPCC chairman should resign; (3) never called for the IPCC’s approach to science to be overhauled; and (4) did not begin withdrawing from the IPCC in January 2010.

As a result of a nomination process that began in January, 2010, Dr. Weaver became a Lead Author for Chapter 12: “Long-term Climate Change: Projections, Commitments and Irreversibility” of the Working Group I contribution to the Fifth Assessment Report of the IPCC.”  That work began in May, 2010.  Dr. Ball’s article failed to mention these facts although they are publicly-available.

Dr. Tim Ball also wrongly suggested that Dr. Weaver tried to interfere with his presentation at the University of Victoria by having his students deter people from attending and heckling him during the talk.  CFP accepts without reservation there is no basis for such allegations.

CFP also wishes to dissociate itself from any suggestion that Dr. Weaver “knows very little about climate science.”  We entirely accept that he has a well-deserved international reputation as a climate scientist and that Dr. Ball’s attack on his credentials is unjustified.

CFP sincerely apologizes to Dr. Weaver and expresses regret for the embarrassment and distress caused by the unfounded allegations in the article by Dr. Ball.

But reading John O’Sullivan’s spoon-fed “interview” one can’t help but conclude that a vicious liberal-environmentalist climate conspiracy is unquestionably trying to punish Dr. Ball, honorable truth-speaker, through the courts. Any money he received from oil companies was “accidental“. The only real error that he made, charmingly central to his accusations, was an “honest” one. And by gosh he’s terribly worried about “the credibility of science in general”.

I urge Dr. Ball’s courageous supporters to keep those donations rolling in. I sense that there’s so much more on-the-record entertainment ahead.

On “Trap-Speed”, ACC and the SNR. Anthony Watts gives us a guest post by William McClenney, a geologist and “environmental consultant”. He tells us, at tiresome length, that things have happened quickly in the past so who cares if they happen again? So what if they caused civilizations to collapse? We R smart now.

Is there a signal in McClenney’s noise? I don’t think it’s worth the effort to find out. Arrogant geologists love to invoke poorly characterized ancient events to dismiss anything happening in the modern world. Whatever.

There is no evidence whatsoever that the lack of warming seen in the global average annual temperatures seen in the last decade has changed.

Hmmm. If you play the usual bogus denialist statistical mis-representation and ignore all the natural contributions that have been tending towards cooling. And then add in a comparison of individual months to cherry-picked years. This is eye-rollingly stupid/dishonest.

“No, no” say the commenters, “we’re on the cusp of an ice-age!” They also declare, standing with a dripping brush in their hand, that them durn climatologisters have painted themselves into a corner. Somehow.

“Does Hadley Centre Sea Surface Temperature Data (HADSST2) Underestimate Recent Warming?“. Anthony Watts knows that the politicians meeting in Cancun next week to discuss climate issues need the best scientific advice, so he’s gonna make sure its available to them, protected by a mountain of bullshit.

Bob Tisdale's plot of the difference between the HADSST2 sea surface temperature measurements and the HADISST satellite measurements. The step "up" represents an overcorrection and hence an underestimate of true SST.

“New discovery may lead to a malaria vaccine“. This will make Indur Goklany happy, because malaria is what we should really be focussed on, right? Anthony Watts got so worked up on that comment thread that he banned a critic that he’s still trying to argue around.

Why did Anthony and so many of his commenters feel the need to co-opt Rachael Carson? The comments in this post still talk about “the lies of Rachael Carson”, claim that Carson was “a Malthusian” and continue to compare her to Hitler. Was she Al Gore’s mother? Hilarious.

So Australian scientists have identified how the malaria parasite to attach to and enter red blood cells. Excellent development, but it doesn’t change the fact that Anthony and Indur have enthusiastically milked the distraction of malaria and DDT use for their own ideological purposes.

Sorry, no get out of jail free card for you Anthony. Way too much recidivism.

“Wasted Opportunities“. Thomas Fuller steps up to the plate for Anthony Watts again. He thinks it’s a shame that so much effort has gone into renewable energy sources: solar, wind and biofuels (no love for hydro or tidal?). We should be using cogeneration! Ah, if only we all lived beside a power plant.

Oh, wait, we are using cogeneration! 7% of energy in the US, even more in some Scandinavian countries. So, Thomas’ point is what exactly? Use more somehow? He also claims cogeneration “gets little attention from environmentalists”, but doesn’t really put much effort into the accusation. This post is just Fuller filler.

“Where Consensus Fails – The Science Cannot Be Called ‘Settled’“. Anthony Watts gives us another entertaining guest post by his Steven Goddard replacement, Thomas Fuller. Thomas tells us that back in 2008 Dennis Bray and Hans von Storch surveyed 379 “climate scientists” online. How would you answer a question like: “Some scientists present extreme accounts of catastrophic impacts related to climate change in a popular format with the claim that it is their task to alert the public. How much do you agree with this practice?” Well, you’re obviously a smart scientist who knows that AGW is all made-up!

To quote the report itself “The survey employed a non-probability convenience sample.” This is a sort of admission that the survey is completely untrustworthy. Just the kind of evidence Anthony Watts finds the most useful.

By the way, who is it that keeps claiming that believers in AGW say that “the science is settled”? Denialists do, that’s who, so they can claim imaginary victories over a straw-man. Informed participants know that we are constantly learning more about the historical evidence and mechanisms of Global Warming. It’s just that what we learn keeps agreeing with the AGW proposition…