“Apparently Governor Brown, you’ve never visited the weather station at Lake Tahoe” (2012-08-13). Anthony Watts gets his shorts in a knot because the Governor of California, whom he derisively refers to as “moonbeam” says that “Global warming’s impact on Lake Tahoe is well documented.”

Now if there’s one thing Anthony likes it’s a tasty cherry-pick. His (unqualified) buddy Russ Steele has done the ‘sciencey analysis’ for him too! It’s all laid out on Russ’ website, concerned with “AGW Defeat” as well as security, liberty and property.

First Russ/Anthony decides that the Governor is referring to a particular Lake Tahoe weather station, one that they can spin to their own benefit.

Then he declares that the rise is all “Urban Heat Island” effect – a tennis court was built nearby in 1980! Actually, as Anthony knew, the courts were built in 1973 and can’t be honestly linked to the alleged artificial 1980 change in temperature trend. Which kinda happened globally, so that’s one heck of a tennis court.

Next, it’s also all bad weather station siting. There’s a fire barrel nearby, it must burn constantly! Anthony, of course, has no evidence about how long the fire barrel has been there, how often it was used, or at what time of day it was lit in comparison to the times of measurement. Still, fire barrel!

Next, he selects some other stations that show a different temperature trend (still up though, unless you squint… which Anthony does). This is the one thing that could be a legitimate argument, but of course he restricts himself to selected weather stations that suit his argument, not a scientifically legitimate regional comparison. Doing that might not make his case…

Finally, he declares that the scientists involved are “political hacks”. Surely if this was likely to stick he’d start and finish with this. And maybe demonstrate it clearly.

Well! Done and dusted for Anthony. A disused fire barrel and tennis courts in place long before a disputed temperature trend started have proven, once and for all, that there is no Global Warming. Never mind that his argument never rises above vague, un-verified supposition.

Note: This post was written so that comments made in a recent but unrelated post could be associated with the correct topic. It’s just run-of-the-mill denialist noise on Anthony’s part.

But what do the satellite readings say Anthony? Oh, not so useful. Too bad your surface-stations project blew up in your face too.

Step one: copy and paste (in this case a 2005 report from Columbia University’s Earth Institute).
Step two: insinuate (in this case about the temperature record quality).
Step three: profit!

“Australia’s white summer, Monbiot’s red fury“. Watt a surprise, Anthony Watts drawing our attention to a freak weather event in Australia. This must surely prove that there’s no Global Warming! Anthony also stretches his mental capacity to compare the size of Australia to America and to Europe. Anthony is mad that environmental reporter George Monbiot consulted “the kids at the Climate Rapid Response Team“, aka professional climate scientists, to understand this Australian weather. How dare he!

Hmmm... Dr. Spencer's map is pretty red. He must be in on the plot now too.

Anthony has to come up with something to distract from the fact that 2010 has proven the hottest year in the instrument record even with only a moderate El Niño influence. (Note: who cares about one year? That’s a denialist distraction. It’s the long-term trend that matters.)

Further more, we learn that the weather stations in remote Greenland communities are clearly affected by the urban heat island effect. Anthony’s speculation proves it! (Maybe this particular rant was a bit of nostalgia for the old days when Anthony regularly tried to get away with this UHI b.s.) 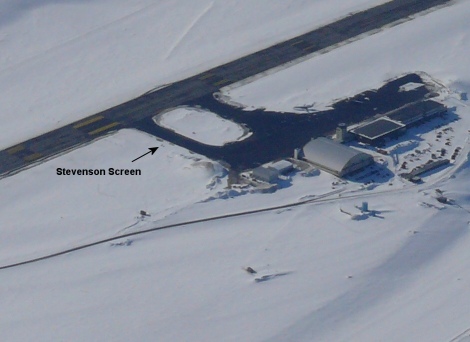 “Russian scientist suggests colder times ahead, cites UHI as a worry“. My gosh, Anthony Watts has proof that there’s no Global Warming! It’s all Urban Heat Island effect, which no-one has ever noticed. Just ask Oleg Pokrovsky from the Voeikov Main Geophysical Observatory.

He apparently claims, on the basis of nothing, that there has been a 12 year “Arctic cold snap” that no-one has noticed. They’ve all been tricked by those lyin’ thermometers in the US which are merely showing UHI effects. Eye-roll.