“My Blog Spawn”. Thanks, I guess, to What’s Up With Watts for pointing out how Anthony Watts privately obsesses over his critics, in all the completely irrelevant ways possible. What a painful example of projection, resentment, back-of-the-classroom goonery, and (hard for him to fight the compulsion) cherry-picking. If he doesn’t stop Googling he may go blind! 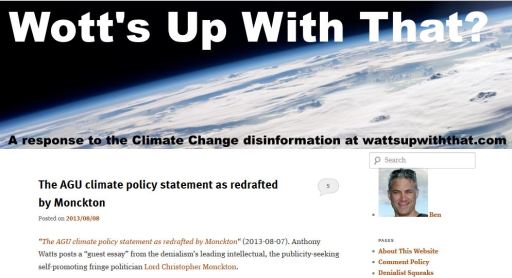 Reason for creating the blog: he got kicked off WUWT for multiple policy violations, got mad, still trying to get even.

Anthony wants you to know that I frivolously run marathons, but not that I’m a geologist. His way of deflecting my exposure of his bankrupt arguments is troll flickr for photos of me that he thinks are embarrassing, not to point out any actual errors on my part (hey Tony, here’s a tip; I have funnier ones on Facebook). Naturally my motivation, according to him, is revenge over unspecified “multiple policy violations” in my comments on his blog. Not his endless lying and remorseless Nixonian suppression of opponents.

Hats off to fellow “skewered” garbage collectors, currently vvattsupwiththat.com, wottsupwiththatblog.wordpress.com, whatsupwiththatwatts.blogspot.com and hotwhopper.com. These days you have a stronger stomach that I!

“Climate Progress blog shuts down – disappears all previous comments“ (May 30, 2011). Nothing like a measured response, eh Anthony? The Think Progress website underwent a redesign over the weekend and Anthony Watts is eager to give a definitive assessment:

It appears the mendacious Joe Romm has been given new marching orders by Center for American Progress Big Brother Blog: “Think Progress”. From what I make of it, it seems the management realized that CP just wasn’t holding much readership, as it looks like the same 30 commenters or so frequent the place.  Sooo…the spin is on. Joe’s doing his best to make his forced merger under Think Progress look like a win.

So none of the cool kids read Climate Progress, Anthony’s blog is way better anyway, and Joe Romm took his ball home (“disappears all previous comments”) because of all the mean things the cool kids, who never go there, were saying.

Reality: It was a website redesign! Sometime comments take a while to reconnect. It’s not a nefarious tactic to suppress the vigorous triumph of denialist criticisms. Climate Progress and Think Progress have always been closely linked, if anything it seems that “Think” will be promoting “Climate” more, not absorbing it.

Christ! Anthony’s grasp of website management is even worse than of climate science. And that is truly saying something. Anthony sounds like a kid who can’t best his school-yard rival hoping their parent will do it for them.

Here are a few Climate Progress posts about the process:

2011-08-24 Update: It took a while, but the old comments are finally up again. So much for Anthony’s accusations.

“A reply to Senator Menendez from Santa“. Har, har. Two days before Christmas, Anthony Watts delights in an insulting joke response from Santa, recycled from a 1974 letter from the Cleveland Browns, to Democratic Senator Robert Menendez’s “Letter to Santa” on Huffinton.com.

“UK’s coldest December (so far) in 100 years, brush fires in Israel“. Anthony Watts shouts that cold UK weather is proof that there is Global Cooling. Also an Israeli forest manager who claims that Israeli bush-fires are more intense because Global Warming must be a “rent seeking nimrod”.

“Quote of the Week“. Anthony Watts brings to our attention a quote from Dr. Roger Pielke Jr. about the hated Joe Romm that is “long overdue”, prompted by Joe’s coverage of Clive Crook at the Atlantic repeatedly smearing climatologist Dr. Michael Mann:

“More than any individual — James Inhofe and Marc Morano included — Joe Romm is responsible for creating a poisonous, negative atmosphere in the climate debate. Responsible voices should say so, this nonsense has gone on long enough.”

This is code for “Joe Romm is kicking my ass all over town.” You see, Joe Romm has a Physics Ph.D. but Roger Pielke Jr.’s Ph.D is in… political science. They’ve crossed paths many times, but it’s like bringing a knife to a gun fight, and Romm doesn’t sugar-coat it.

Interesting to see the implication that denialists Senator James Inhofe and political operative Marc Morano are also “poisonous.” I’m not sure how Anthony avoided that short-list, but perhaps it’s because he’s one of Roger’s buddies. Roger Pielke Jr.’s claim of being (the only?) “honest broker” in the climate change debate is currently being laughed out-of-town. Here are two links (Roger at Face Value and The Honestly Broken) about Roger’s self-serving concept.

“Marketing Advice For Mad Scientists“. Anthony Watts says that the 250 scientists (all members of the élite US National Academy of Sciences) who have signed a letter condemning the recent political and personal attacks on scientists, particularly prominent climatologists, are not exhibiting “good judgement”.

Anthony also says that “it has not gone over too well” because Andy Revkin, a journalist who is now courting page views from Denialists, says so. The letter even uses “the d-word”! And they’re not climate scientists. Oops, they are. Barely literate Anthony even calls it “poorly written”.

In fact it’s such a failure that Anthony has to resort to putting words in their mouths to assuage his resentment. His post reminds me of the class clown hunched down in the back row, snickering at his own ‘brilliance’.

Anthony’s also putting in a full court press delaying or editing the few comments that challenge his version of the truth, even though his commenters are working themselves into even more of a lather than usual. I particularly enjoyed the comments comparing the letter to the bogus “30,000 scientists” that “signed” the crack-pot Oregon Institute of Science and Medicine Petition.