“WUWT-TV’s answer to Al Gore’s ‘Dirty Weather Report’ is ON THE AIR” (2012-11-14). One word: painfully amateur. OK, that’s two words. It’s going to be a useful resource though, a concise compendium of dumb-ass blow-hards that won’t be able to squirm away from their claims.

The constant technical stumbles actually make Anthony Watts’ F*CKUP-TV look better than it is though. Surely they meant to say something else? Something intelligent? They just lost their notes, right? 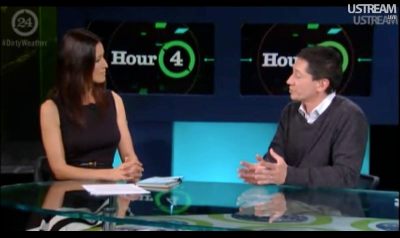 So who paid the $10,000+ for Anthony’s web setup? Not to mention the bandwidth costs.  He’s being coy about that…

“Al Gore’s ‘drowning polar bear’ source reprimanded“ (2012-09-29). A lying scientist has been caught red-handed! We’ll get those guys, one at a time. That’s a check mark on the good guy’s side! No need to read further.

You can always count on Anthony Watts to baldly misrepresent the facts. To put this plainly, Dr. Charles Monnett was accused of corruption (helping a scientist apply for a grant) and scientific malpractice (reporting his observation of drowned polar bears). This appears driven largely by political irritation over how other information he disclosed “helped reveal that Bush administration Arctic offshore drilling reviews illegally suppressed adverse environmental consequences.” Also, his observations were mentioned in that Communist Al Gore’s filthy propaganda, An Inconvenient Truth.

After an incompetent investigation that focused obsessively on the irrelevant dead polar bears, Dr. Monnett was only “reprimanded” because he had “improperly disclosed internal government documents”. Isn’t that the kind of thing that Anthony has been demanding more of? Transparency, letting in the light, resisting persecution, citizen-science, etc.

As usual Anthony falsely holds his target to a higher standard than he could ever live up to. Dr. Monnett is just collateral damage in Anthony’s Gore-ophobia.

REPLY: The issue is mostly with Gore’s ridiculous claims, AGW had noting to do with the dead polar bear and a dead polar bear does not a trend make. Monnet didn’t speak out when Gore took his observation and turned into into a bogus sympathy pitch -Anthony

Here’s an enlightening quote from the Bureau of Ocean Energy Management press office that Anthony didn’t manage in include in his conveniently partial copy-and-paste of the Seattle Times article (this is called burying the lede):

A BOEM spokeswoman, Theresa Eisenman, said the findings in the report do not support a conclusion that the scientists involved engaged in “scientific misconduct.”

After Anthony’s Zapruder-style analysis and mail-order recreation of the “fake” CO2 set-up he declares:

The only conclusion one can make from these four points is that the video of the “simple experiment” is a complete fabrication done in post production.

You know, he’s hit in the only possible explanation. Thus proving once and for all, again, that Global Warming is a lie! After-all The Longest Day, Gone with the Wind and Titanic were (probably) done in a single continuous take, why not every other piece of video?

Buried in Anthony’s howling about fake experiments not proving that CO2 is a “greenhouse gas” is the quiet admission that CO2 is actually a greenhouse gas. Because only a complete scientific illiterate would claim otherwise. But pay no attention to that awkward detail, huh?

So after Anthony’s furious nitpick accusations and his reader’s chorus of “brilliant!”, what are we left with? Anthony Watts hates Al Gore with a terrier-like obsession. Treat his occasional pleas for civility and objectivity as the fig-leaves they are.

Update 2011-10-01: There are some entertaining comments on Anthony’s efforts over at Media Matters, I like this one: “If you’re shocked to find out that real volcanoes have NO baking soda inside them, you just might be a Republican.”

“Bastardi: Science and reality point away, not toward, CO2 as climate driver” (2011-08-12). You know when Joe Bastardi guest-posts on Anthony Watts’ blog you’re in for a chuckle. Here he’s trying to expand on (spin?) his whopper-fest on Fox News a few nights ago.

With the coming Gorathon to save the planet around the corner (Sept 14) , my  stance on the AGW issue has been drawing more ire from those seeking to silence people like me that question their issue and plans. In response, I want the objective reader to hear more about my arguments made in a a brief interview on FOX News as to why I conclude CO2 is not causing changes of climate and the recent flurry of extremes of our planet. I brought up the First Law of Thermodynamics and LeChateliers principle.

“Brought up” in the sense of vomited, I guess. Joe has no clue what the First Law of Thermodynamics is (hey, Joe, the greenhouse effect doesn’t create heat) or LeChatelier’s principle (how a chemical equilibrium responds to changing conditions). In the first paragraph alone of his Fox News commentary everything he says is provably false. Five sentences, five boners. (Thanks tamino for holding your nose long enough to spell it out so clearly.)

After years of smack-downs he’s still pushing the “since 1997” lie, still trying to fake it. Here’s an example of Joe Science.

Anthony assures us that “a follow up post – more technically oriented will follow sometime next week.” So don’t pick on poor Joe! Presumably his “follow-up” walk back most of his wild errors…

Still waiting for Joe’s re-explanation, although he does add his own meandering comment that suggests we wait 30 years to see that he was right all along. Bad Astronomy’s Phil Plait scrutinizes Joe’s so-called arguments at Big Picture Science: climate change denial on Fox News.

There are some real whoppers in the Watts Up With That comments, but this early one really caught my attention for self-serving justification (stunned italics mine):

@Chris_Colose: you have to pick your battles a little better. Joe Bastardi is not an academic researcher but a private sector meteorologist. He is an advocate for his point of view based upon the knowledge he accumulates. He is putting out his opinions for public consumption but there is no accountability implied…

REPLY: Yes, this is the same silly claim that comes up again and again, one one hand when a they lose a point in an argument they’ll claim “but he’s not a climate scientist, so his opinions don’t matter” then when they feel they have the upper hand we’ll hear, “he’s not scientifically rigorous enough, his arguments pale in comparison to our best climate scientists”. – Anthony

So… ignorant or deceitful “advocates” should get a free pass? Also, please show me a climate science argument “won” by someone like Joe, Anthony. Shorter version of Ryan and Anthony’s argument: “We don’t know anything, but every time we flap our gums we win. Unless the other guys cheat.”

Climate Progress piles on: Joe Bastardi is ‘Completely Wrong’ and ‘Does Not Understand the Very Basics of the Science’, Climatologists Explain

Five years of “An Inconvenient Truth” (May 24th, 2011). Anthony Watts wears his fingers down to tiny nubs hammering out Yet-Another-Criticism-of-An_Inconvenient_Truth, this time a true opus:

After-all Julia A. Seymour of the Business and Media Institute (staff of four) says so. And if you can’t trust an organization “devoted solely to analyzing and exposing the anti-free enterprise culture of the media“ then who can you trust? No-one, that’s who.

Denialist fixation with Al Gore and his documentary film has been both obsessive and compulsive since the first screening of the Oscar-winning documentary, and five years on it’s still “inconvenient”. Denialists have leveled every insinuation and nit-pick they can, but it still stands unbowed. As a rational person though I have to say “so what?” Even if it was proven beyond a doubt that it was filmed on the same soundstage as the Apollo Moon Landings, the abundant evidence and knowledge that supports scientific concern over Global Warming will remain. An Inconvenient Truth is simply a popular presentation of that concern.

So what do we find in 5 Years After: Networks Celebrate Al Gore’s ‘Inconvenient Truth,’ Ignore Scientific Flaws, Criticism? A sullen regurgitation of denialist attempts to undermine a popular documentary and teach them scientists a thing or two. Empty-headed gum-flapping. Here’s a few highlights:

Shredding the “climate consensus” myth: More Than 1000 International Scientists Dissent Over Man-Made Global Warming Claims – Challenge UN IPCC & Gore. Anthony Watts’ friends at Climate Depot have a growing list of “eminent scientists” whose keen perception of climate science leads to such conclusive analyses as “the whole thing is a fraud“! There are now a thousand senile Republican curmudgeons bravely demanding to be heard! Everyone else is apparently a co-opted, indoctrinated, coward.

So, Anthony, is a thousand an increase from 400 or is it a decrease from 31,000? There are so many faked-up lists of denialist supporters that it’d hard to keep track of them all.

“Gore effect” strikes Cancun Climate Conference 3 days in a row. Anthony Watts thinks a dumb political remark by the “skeptical” Dr. Roy Spencer, in Cancun on a political mission for a lobbying group (CFACT), is worth noting. Does Dr. Spencer really think that the possible secret presence of Al Gore is triggering a cold spell in Cancun?

I thought that “skeptics” were adamant that scientists should keep out of politics, but apparently the goose and the gander get different sauces after-all.

“Visualizing the entire 2010 Atlantic hurricane season in one image“. Anthony Watts copy and pastes a NOAA visualization of all of 2010’s North Atlantic hurricanes to feed his reader’s need to complain about them durn scientists. And Al Gore.

The hurricane visualization Al Gore should have used?