“Antarctica Has Sea Ice Rabbit Ears, a V for Victory or Maybe It’s a Peace Sign?…” (2014-01-19). Anthony Watts’ friend “Just The Facts”, better known as “Just the Ignorance” has a keen scientific eye, based on no education whatsoever, and has noticed that Antarctica has bunny ears. Ice, anywhere, means cooling everywhere!

Funny how “Just The Facts” manages to ignore so many of them. Maybe he meant just a fact, not the relevant ones. Do glaciers float when the reach the sea, for instance? Do they become thinner? Something for JTF to ponder. 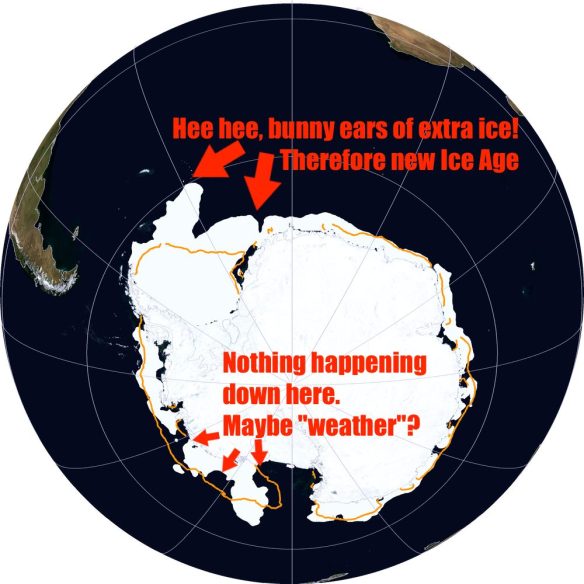 “Sea Ice News – Call for Arctic sea-ice forecasts, plus forecast poll“ (May 19, 2011). Pull the other one, Anthony Watts! I almost shot tea out of my nose reading Anthony’s blithe claim:

It has been awhile since I’ve done a sea-ice report. That said, not much of note has been going on in the sea-ice arena, we are in that time of year when all of the years converge into a tighter grouping.

I guess his stalwart bobble-heads were starting to need reassurance that Global Warming was still over. Unfortunately there are a few differing opinions out there:

Anthony even thought he could bluff his way past his own chart. Nice try. He does try to bury it among a busy collection of eye-glazing squiggles and bar charts.

Nothing to see here, says Anthony... My annotations in red.

“Sea Ice News #33“. Anthony Watts tells us that the ice is coming back. Global Warming is over! Too bad the trends haven’t actually changed. Still, keep talking about it. If you really want Sea Ice News, go to the National Snow and Ice Data Center and ignore Anthony’s spin.

Also, why are “residents of Baffin Island in the Canadian Arctic asking what happened to the sea ice cover this year”? (Climate Central) As NSIDC director and senior scientist Mark Serreze says, “These are areas which should’ve frozen over in late November and they’re still marine at this point, which is very unusual.”

Now I suppose we simply have to wait 30 years for Anthony to begin to accept that the disappearing Arctic Sea Ice is statistically meaningful. After-all, this is “just the first data”!

“Sea Ice News #32 – Southern Comfort“. Anthony Watts tries to explain why he’s been avoiding the topic of Arctic Sea Ice. Apparently because the precipitous drop in Arctic Sea Ice, which Anthony is careful not to display until the end of his post, isn’t nearly as interesting as the statistically insignificant rise in Antarctic Sea Ice. Even though Arctic conditions are primarily affected temperature and Antarctic conditions are primarily affected by ocean currents.

Cue bold-faced muttering about “healthy skepticism”, hidden data (oops! it was there all along) and wounded references to nasty scientists making accusations of breathtaking denialist ignorance. Oh, and apparently Tamino’s takedown amuses Anthony.

“Sea Ice News #31“. Anthony Watts discusses Joe Bastardi’s idiotic half-cocked accusation of fraud in the NSIDC’s Sea Ice data. You know your ‘team-mates’ are becoming a liability when even Anthony has to walk back their claims and even try to minimize the damage by admitting things like: “eyeballing can be an error prone activity, and a risky bet.”

Anthony has the gall to lay the final blame on the NSIDC for not publishing their daily data. Why, because they release data on a weekly basis, an over-eager denialist might jump to a rash conclusion!

Eyeballing is the only tactic Anthony’s can use to pretend he has a factual point in the Global Warming discussion, isn’t it? Oh, there’s cherry-picking too.

“Joe Bastardi’s 2011 Arctic Sea Ice Prediction“. Joe Bastardi says “the ice is coming back”. But it will be a warm summer too. Whatever.

Over the summer of 2010, weather and ocean conditions in the Arctic ranged from warm and calm to stormy and cool. Overall, weather conditions were not extremely favorable to melt, but ice loss proceeded at a rapid pace.

Focus on the JAXA and DMI charts, which suggest that in October “things are icing up quickly”. Well duh, it’s winter up there already…

Anthony and the slowly rehabilitating Steven Goddard can always find a cherry-picked counter-example. In this case, Anthony tries to deflect attention from the overall September record by talking about “a quick turnaround” in October and includes several of Goddard’s dumbed-down photoshopped graphics that only show the start of winter increase. He’s also careful to exclude  avoid any reference to Arctic Sea Ice volume.

“Surprise: Peer reviewed study says current Arctic sea ice is more extensive than most of the past 9000 years“. A blogger discovers a paleoclimate paper by McKay, et.al. in the Canadian Journal of Earth Sciences from 2008 and Anthony Watts is on it like white on rice. “Peer reviewed!” “More ice now than ever!” “Natural!!!!”

Oh, it’s only referring to a bit of the western Arctic. Oh, they’re only comparing to Arctic Sea Ice extent of a decade ago, when there was in fact rather more sea ice. Oh, they aren’t suggesting that such low ice extents were common. Oh, dinocyst proxies are a bit dodgy. Oh, the paper is merely titled Holocene fluctuations in Arctic sea-ice cover: dinocyst-based reconstructions for the eastern Chukchi Sea, not “there’s more ice than ever now!”